× Bidding has ended on this item.
Ended

In conjunction with Randy Rarick's Noseriding Project "The SUMMER of '66" 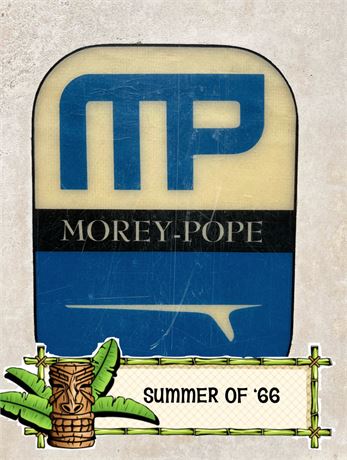 Here is a National Treasure Nose riding machine,  by surfer, shaper and innovator, the creator of Noseriding, Mr. Tom Morey.   Typical MP, distinct, red, high density foam nose block and tail block. According to Mark Fregale, this board was shaped just prior to the Snub evolving into the John Peck Penetrator.  The board still has its original white slip check on the entire deck.  There are some areas where it is starting to peel off.  The new owner may remove the slip check from the deck as it appears the removal process would not leave a shadow, apply new slip check by using textured Rust-Oleum (same as Slip Check), or leave the board as is.  We thought it was best to keep it in its all-original condition..   The logo is in perfect shape, showing clear reveal foam inside the logo.  The high-density red foam nose and tail block with its offset redwood stringers makes this board clearly identifiable as a Morey Pope Snub Nose-rider.  The serial # 2623 J is clearly identifiable on the tail block.  The bottom is all clear foam with some minor blemishes and fixed black fin.   This board came from Pat McGees Surf shop in Port Aransas Texas in the 90’s and now available for auction at NO RESERVE!.  A similar board in Randy Rarick’s recently release design project “Summer of 66” has all the similar characteristics.   At 10’3" the winner of this board will definitely be the Master of the Universe. Good luck!

Condition 9 out of 10 Original.